One week ago, I posted my first blog and launched my Baldie Boo Instagram. I’m so blown away by the response and am excited to see what is to come. The fact that strangers are reaching out to me with their own alopecia stories is legit the best ever. Sharing is caring with this disease, that’s for damn sure. So, speaking of sharing, I thought I’d take a little trip down memory lane, and share some deets on my alopecia journey. Buckle up kids and bring your lint rollers because shit is about to get hairy.

First, I need to rewind back to 2013. Actually, lets throw it back one more to 2012. 2012 was not a good year in my life. I was in a dumpster fire of a relationship. I was living in Colorado and my only real Colorado best friend was my boyfriend of 2 years (because I moved to Colorado with him in 2010). Now typically you don’t use dumpster fire and BFF to describe the same relationship, but that’s just the way the cookie crumbled. I made A LOT of poor life decisions in that relationship. I mean I look back at 2010-2013 Supriya and think, good lord woman, get it together!!! The list is endless and to say I ignored the red flags is the understatement of the century. Times were bad for my little brain and I didn’t have any real friends or family out here to shake me until I started making sensible choices. Instead I started to drown in my abyss of emotions and my depression and anxiety were at a whole new level of bad news bears. Now back to 2013. I’m at Target, living my best life, buying all the things I do not need. The Target dressing room has a million mirrors, so you can see every awkward angle of yourself and be horrified. Well today I happened to have my hair up in a pony tail and was trying on something or another. I look in the mirror and can see the back-left side of my lower scalp. I notice a coin shaped patch of skin near my pony tail. After much maneuvering and trying to capture it on my phone, I realized it was for sure a bald spot. I go to the doctor, he ships me off to a derm, he looks at the spot and says yup its alopecia. He shoots it up with some steroid injections (not the gym brah kind) and sends me on my way. I’ll get into treatment options in a later blog, but this is one of them. I continued to get these less than pleasant scalp injections for the next few months and poof my hair grew back! Phew!!

Now lets fast forward to 2015. Things in life are turning aroundISH. I had signed up for crossfit at the end of 2013 and for the first time in my Colorado life I had friends. Not just casual acquaintances, but actual ride or die type friends. My relationship is over, but at the end of that dumpster fire relationship, I was about 87 levels below rock bottom. I hated myself more than anyone or anything…and if I’m being nitty gritty honest here, I wasn’t sure if I wanted to be around in the world anymore. Depression is such a fuck. It had taken over every ounce of my body. It was a serious climb to start building myself back up to okay…let alone good. Making real friends was a great starting point though. For the first time since moving to Colorado, I had people in this state who genuinely cared for me and loved me. I had been surrounded by so much self-inflicted negativity for so long that it was a new normal to function around caring, loving people again. So, I’m out here living life and starting to dig out of my hole. My little brain was still in rough shape though. I would fake happy around my friends and come home and crumple up in a heap and just cry and cry and cry. Life felt impossible most days. Like I said, depression is a FUCK. I get man, if you’ve been blessed enough to never have had depression or anxiety, this all probably sounds like nonsense to you. If I could have just flipped a switch and changed things, you better believe I would have. But I was just so very stuck, and mentally I was average at best. I wasn’t seeking out therapy or medication to deal with these issues at that time, so my emotions just festered in me until my body had had enough.

In May of 2015 I was getting ready for work. I love big ass hair, so I of course was teasing mine, when I noticed a pile of hair in my hands. I’ve always been a shedder, but this seemed like a large amount. From that day on, my hair fell out piece by piece, handful by handful, all day long. I would shower and the tub would be covered in obscene amounts of hair. It would fall while I was driving, while I was working out, while I was sleeping. ALL DAY LONG.  I went to the doctor and he told me I was having an alopecia flare up. While there is no known official cause for alopecia, he attributed it to my emotional stress. I was given some medication and told not to stress out…which let me tell you is a really easy thing to do when your hair is falling out by the handful…NOT LOL. This is when I entered my Gollum months. Now I don’t actually watch Lord of the Rings, but I know Gollum. Him and I looked like total twinsies during this time. I wish I was joking, but I’m not. We basically had the same who wore it best hairstyle. My hair continued its mass exodus and by August it was basically all gone. 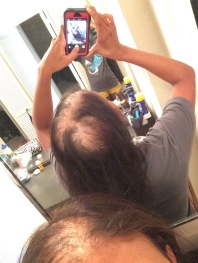 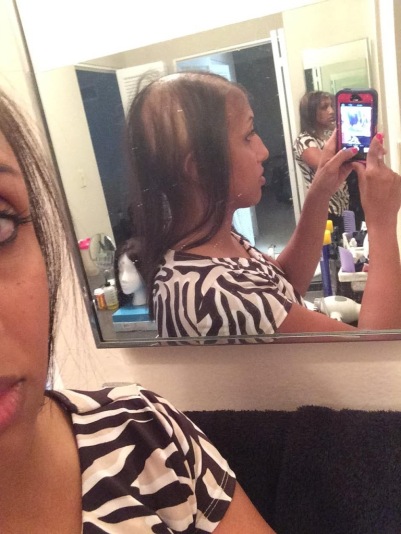 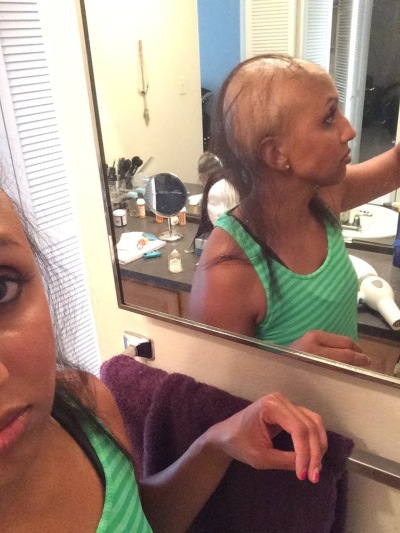 I went to a salon called Hanas Designs and purchased my first full wig. Hana shaved off my last few strands of hair while I sat in her chair bawling my eyes out. This was the day I made wearing wigs trendy…sorry Kylie I got you beat! Those 4 months of hair loss were just so awful. I felt like I was losing my identity, my femininity my self-worth strand by strand. I know, I know, I know, its just hair. Trust me I KNOW. But I want to be raw and honest about my experience and that is what I was feeling. I didn’t think my depression and anxiety could get worse, but man oh man did this crush me. My desire to live was just so little. Looking at this now, I realize how silly that sounds. Life is so precious and such a gift, but back then I am not exaggerating when I say depression had taken over every damn ounce of my body. So, this is where I began my journey into bald life.

This story is long, and I don’t want to turn this blog entry into encyclopedia volumes A-F. I’m gonna pause here, but I will continue in a later post. For now…To Be Continued…

Reading this part of my story seems so surreal now. Its just a few years later yet I am SUCH a different person now. I was at a holiday party yesterday with some of my old crossfit friends, and my friend Jenny mentioned how I seemed the happiest she’s ever seen me. It’s the truth! Life is for real good so damn good now. While this entry is emotionally intense, the light at the end of the tunnel was nearer than I realized at that time. So that’s all for now. Talk to you soon my fellow baldie and non-baldie boos!! Come back soon! xoxoxo

3 thoughts on “The Baldie Boo Story”